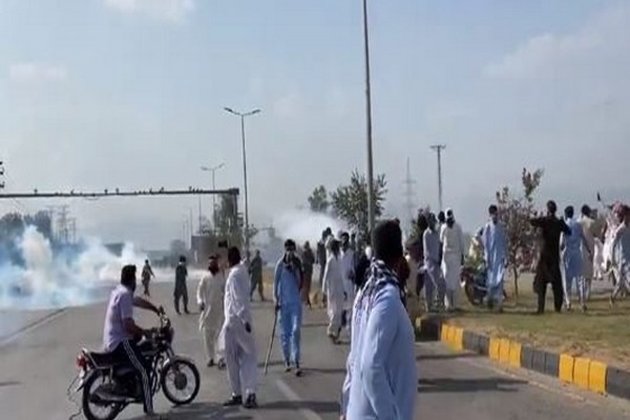 Islamabad [Pakistan], May 25 (ANI): Several Pakistan Tehreek-e-Insaf (PTI) leaders were arrested on Wednesday after a clash broke out between the leaders and police as PTI chief Imran Khan flagged off the protest march towards Islamabad.

Tensions gripped the territory of Punjab as the PTI started the march with several protestors forcing their ways through the blockades in Lahore. Police fired tear gas shells on the protestors to stop them, reported the Dawn Newspaper.

PTI claimed that the vehicle of its leader Dr Yasmin Rashid's was attacked amid the convoy at Bati Chowk in Lahore but this does not stop them from marching towards Islamabad.

"We are going to D-Chowk and no one can stop us", said Imran Khan, after reaching Swabi, reported Dawn.

PTI chief, terming the incumbent government a "group of thieves", said that the most corrupt people in the country are afraid of the masses which is why they had placed containers. The police detained the protesters and harassed them as they participated in the Azadi March, he added.

Imran, addressing the ruling coalition government, said that PTI government did not bar any of them from staging protests as it did not fear the people.

"Rumors false information about the agreement are being deliberately fabricated. Absolutely not! We are moving towards Islamabad, so there is no question of any compromise. We will remain the same till the dissolution of the Assemblies and the announcement of the date of elections. I am inviting all the citizens of Rawalpindi / Islamabad to participate," he tweeted.

Khan who departed for Islamabad from the Wali Interchange in Khyber Pakhtunkhwa tweeted a photo waving to his supporters from a truck with PTI flag in his hands.

PTI chief also urged his protestors to join the march and carry a Pakistani flag calling it a defining moment.

"Would urge everyone to carry the Pakistan flag with them. This is a defining moment today for the Haqiqi Azaadi of Pakistan," he tweeted.

PTI Chairman Imran Khan had announced to start his party's long protest march to Islamabad today afternoon, demanding the dissolution of the National Assembly and a date for the next general election and invited people to join in large numbers.

In view of this, Section 144 was imposed in Lahore, the twin cities of Rawalpindi and Islamabad and Karachi, as well as other major cities in the country, while the Punjab government has deployed Rangers to control the law and order situation.

The federal capital was sealed from the rest of the country as all entry and exit points leading towards Islamabad were closed down with the heavy deployment of police and containers, reported Dawn.

Earlier, the police arrested key members of the PTI and cut off the capital Islamabad under the direction of the Shehbaz Sharif government. The Pakistan police raided the houses of the PTI leaders and workers. PTI leader, Mian Mehmood-ur- Rasheed was arrested after the police made a late-night raid under section 16 of the Maintenance of the Public Order (MPO).

The government rounded up over 1,000 PTI leaders and workers in a crackdown designed to derail the party's plans for a massive power show in Islamabad. (ANI)